On November 8th, over a hundred participants attended the final joint conference of two Horizon 2020 research projects, WOSCAP & IECEU, at the Scotland House in Brussels, which was organised by the Centre for European Perspective (CEP) in cooperation with ESSEC IRENE, the Global Partnership for the Prevention of Armed Conflict (GPPAC) and Laurea University. Both projects developed a catalogue of best practices, lessons learnt and recommendations to improve the EU’s conflict prevention and peacebuilding interventions.

Centre for European Perspective’s representative took part in the fifth panel, focusing on Integrated Approach. Ivana Boštjančič Pulko stressed that the IECEU project developed very concrete recommendations on how to improve the CSDP missions, those are mainly focused on the operational part of the missions. However, as long as the strategic level issues and operational level in CSDP are kept separate, the overall progress in CSDP at the operational level will not be possible. Namely, as long as the issue of member states’ commitment is not resolved, it will be difficult to improve the technical side and concrete implementation of the missions. CSDP missions are political missions with an operational mandate and they seem to be positioned very low on the political agendas of the EU member states. Since member states’ representatives are largely absent from the think tank discussions on CSDP, it would be positive to boost further debate on this issue on the member states level. 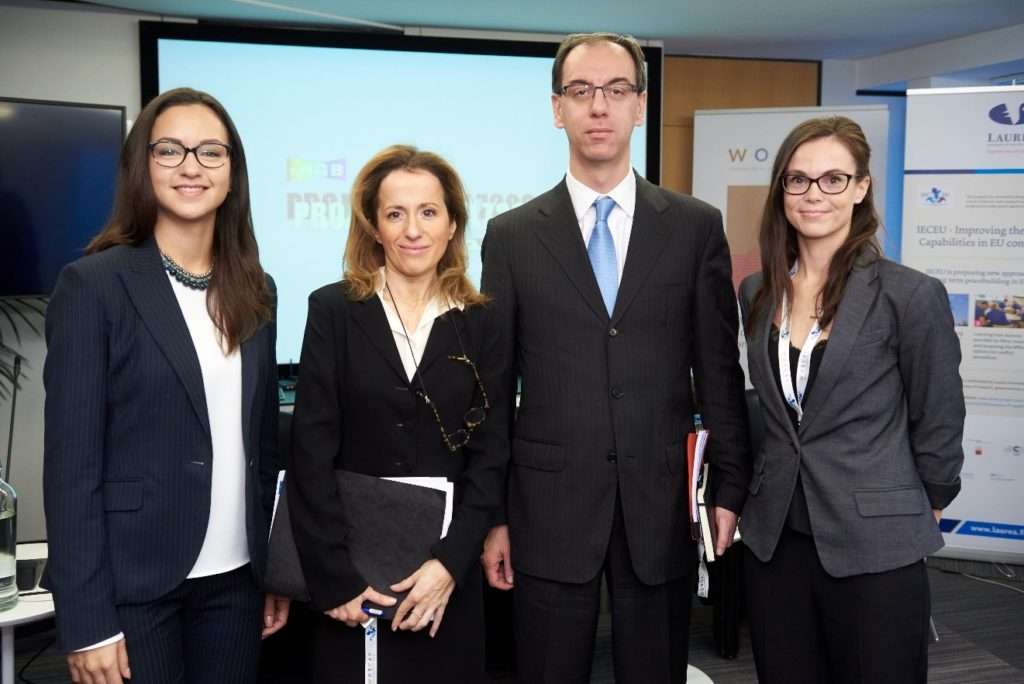 The conference was organized around five panels, which were composed of project representatives together with members of the European External Action Service (EEAS). The conference was opened by Prof.Dr. Linda Benrais, ESSEC IRENE and both project coordinators, Gabriella Vogelaar Project Coordinator of WOSCAP, GPPAC and Kirsi Hyttinen, the Project Coordinator of IECEU, Laurea University presented objectives, methodology and main highlights of research of the last two and a half years.

The main introductory speaker, Mr Stefano Tomat, Head of Division of PRISM (Prevention of conflicts, Rule of law/ SSR, Integrated approach, Stabilisation and Mediation), of the EEAS highlighted the importance of research projects, which clearly show where the mandate of EEAS should lead to. He also mentioned PRISM that has been put on top of the EEAS organigram, where the aim is to join all various capacities, such as CSDP, conflict prevention and others under one roof. 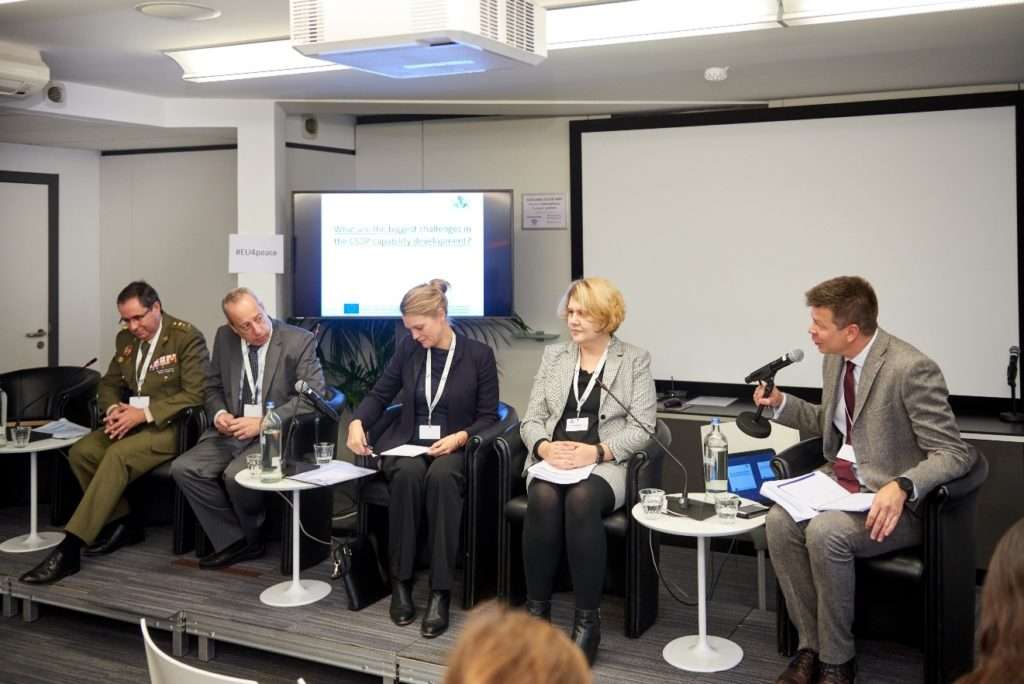 Panel 1 on How to enhance the effectiveness of EU CSDP missions was chaired by Petteri Taitto, Principal Scientist, Laurea University, who presented six core capabilities that were identified within the IECEU project, as well as ten missions used for field research on the basis of which the IECEU recommendations were produced.

Maria Mekri, Executive Director, SaferGlobe, explained that a mixture of strengths and weaknesses was found within all missions that were subject of IECEU research. She stressed the importance of ongoing strategic planning, as well as incorporating lessons learned into the planning process. Giorgio Porzio, Head of Division, Concepts and Capabilities, CMPD, EEAS, stressed the fact that different member states have different interests and Ministries of Foreign Affairs many times do not see ‘what is CSDP’ for them, whereas the Ministries of Defence seem to possess a better understanding. He explained that civilian missions became much more complex and the importance of strategic communication involves also ‘explaining it to our own political partners’. Anselmo Martin Segovia, Head of Division, Exercises, Training, Analysis, EUMS, EEAS stressed the importance of presenting the shortfalls to member states and mentioned that it seems NATO is better at identifying what they need and assigning tasks to the member states.  Annemarie Peen-Rodt, Associate Professor, Royal Danish Defence College, argued that the biggest challenges of CSDP missions lay in its internal complexity; namely member states using different instruments and then trying to work together with field offices as well as external complexity, the ever-changing environment.

Panel 2 on How to strengthen EU capabilities on Multi-Track Diplomacy discussed lessons learnt and policy recommendations based on research findings from Georgia, Ukraine, Mali and Yemen, with particular emphasis on multi-track coordination in EU mediation and dialogue support, as well as institutional capacity-building for inclusive diplomatic engagement (including EU gender architectures). The panel was chaired by Dr. Véronique Dudouet, Programme Director, Berghof Foundation.

Nina Tsikhistavi-Khutsishvili, Executive Director, International Center on Conflict and Negotiation (ICCN), Tbilisi, Georgia stressed that because of involvement of many different stakeholders, a lot of hope was placed on the WOSCAP programme to influence policy-making with special emphasis on the participation of civil society, which is not involved in any negotiations, preparation and discussions. Ana Villellas, Researcher, School for a Culture of Peace, Universitat Autonoma de Barcelona explained that when formal participatory mechanisms are not in place, the EU should push for better connected outcome tracking. The EU has in her opinion enlarged its gender architecture throughout the years and communities of practice have been created. However, this gender aspect is sometimes overlooked internally. Olai Voionmaa, Policy Officer, Mediation Support Team, PRISM, EEAS confirmed that capacity building is important for EEAS in mediation supporting activities since the organised individual coaching seminars (for heads of missions and EUSRs) provide tips and skills on how to make peace processes more inclusive and are also very good opportunities to think through what the EU Global Strategy is. Toivo Klaar, European Union Special Representative for the South Caucasus and the Crisis in Georgia furthermore confirmed that the WOSCAP project provides new impetus for his team’s work. There should be more coordination between the three tracks and wider participation of conflict-afflicted people in peace process. Monique van Es, Programmes Director, European Institute of Peace, confirmed that with broadening the inclusion the sustainability of peace processes are encouraged. The more people that are included, the more change will be witnessed on the ground. She believes that more MTD bodies among EU institutions would enhance awareness, mainstreaming and collaboration between the different tracks but also having clarity on roles, assignment of roles and coordination would be beneficial.

Anna-Karin Häggeborg, Operational Capability Section, Civilian Planning and Conduct Capability, EEAS presented CPCC’s view on the topic. Mascia Toussaint, Executive Director, Enquiry emphasized that more research is needed on how technology impacts CSDP and the following key areas should be improved: standardization of needs, training, exercise and international co-operation. Tobias Flessenkemper, Programme Associate, ECDPM listed concrete recommendations for the development of a future Situational Awareness, Information Exchange and Operation Control Platform (OCP) in EU civilian CSDP missions, those are segmented on the institutional, organisational and technical level. Jan Reinder Rosing, Policy Officer, PRISM, EEAS believes that EU institutions and CSDP missions are overburdened, what is needed are tailor-made solutions on how to improve conflict prevention. Dr. Tedla Desta, Researcher, Maynooth University spoke about strategic communication, which is becoming one of the key branches and programmes of contemporary organisations and governments. Most of the missions and operations are present on most social media platforms but they often garner very small number of likes, comments, shares, replies or interactions from their targeted audiences. Features of echo-chamber are also observed. 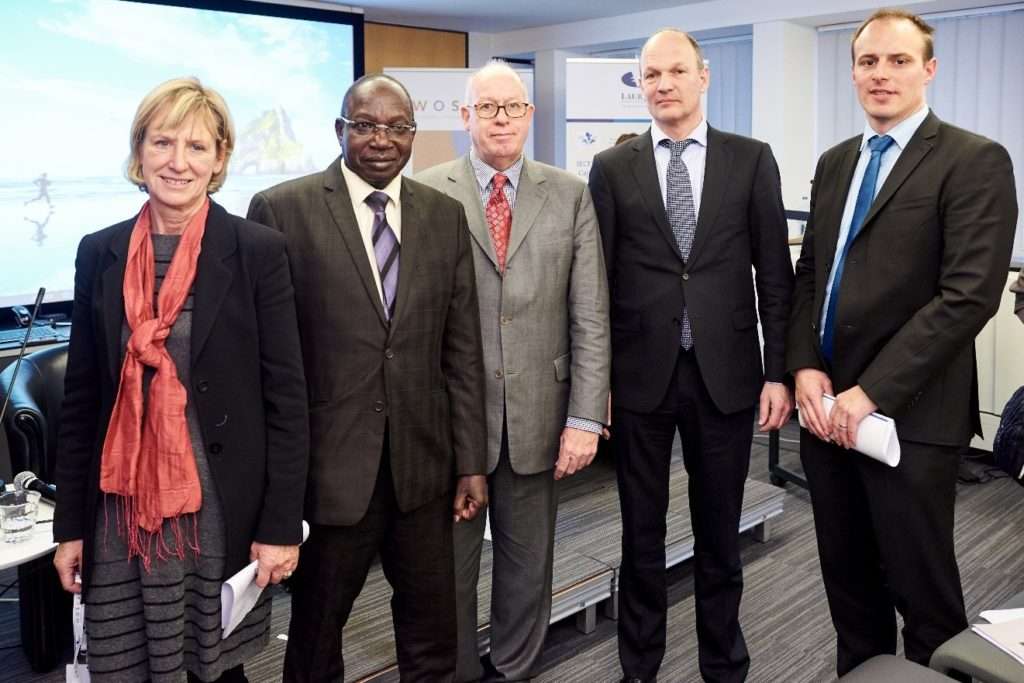 Dr. Chris van Borgh, Assistant Professor, Utrecht University, argued that there is a lack of guidelines to identify stakeholders for the missions. He believes that there is a lot of room for improvement in the field of local ownership and inclusivity and that the EU has strong capacity to coordinate with the local government, rather good with civil society, while it has little capacity to do so with the non-state actors. Pr. dr. Moussa Djiré, Rector, Université des Sciences Juridiques et Politiques de Bamako, Mali, focused his presentation on EUCAP, established in 2014 to provide strategic advice and training in order to support reform in security sector and to modernise the security sector. Dr. Mary Martin, Senior Research Fellow, Department of International Relations, London School of Economics, argued that the field of local ownership is a big normative challenge within the EU, where also the largest room for improvement lies. She also presented the triangular approach between inclusivity, relationships and complementary practices, where the whole of society approach found crossing points. Dr. Rok Zupančič, Marie Curie Research Fellow & Assistant Professor, University of Graz & University of Ljubljana, questioned the quality of research results that are gathered by interviewing local staff, who are nowadays cautious to share information and thoughts, while local interviewees are usually also in favour of the EU since they are being employed by it.

Panel 5 on How to make the integrated systemic approach workable and operational? aimed at reflecting on the current development of the EU Integrated Approach, to see how final inputs from WOSCAP and IECEU projects could feed into its concrete implementation and workability. It was chaired by Mr. René Van NES, Deputy Head of Division, PRISM, EEAS, who stressed that ‘coordination requires a mandate to coordinate’.

Prof. dir. Linda Benraïs, Programme Director, ESSEC IRENE mentioned that the Integrated Approach is a process and requires a multidimensional approach and that political cooperation with member states should be enhanced. Dr. Thierry Tardy, Senior analyst, ISS mentioned that EU missions are likely to change focus in third countries in the future with more focus on migration and terrorism since CSDP should include more activities to secure the EU citizens, which derives from EU Global Strategy. Added value of cooperation and coordination must be known to get actors to work together, since the Integrated Approach requires coordination from different initiatives and actors. Ivana Bostjancic Pulko, Project Manager and researcher, CEP stressed the importance of involving member states in these debates on the effectiveness of CSDP and the Integrated Approach, since they seem to be largely missing in them. Member states are the main actors in shaping policies and adopting the recommendations of both research projects. Debate on the level of member states should be given an additional boost since the member states’ commitment is the main contributor to the effectiveness of CSDP missions. For the moment, it seems that CSDP missions are positioned quite low on the political agendas of the member states. Ms. Sonya Reines – Djivanides, Executive Director, EPLO stressed that CSDP is not a solution to everything and highlighted the importance of other tools available as part of the Integrated Approach. 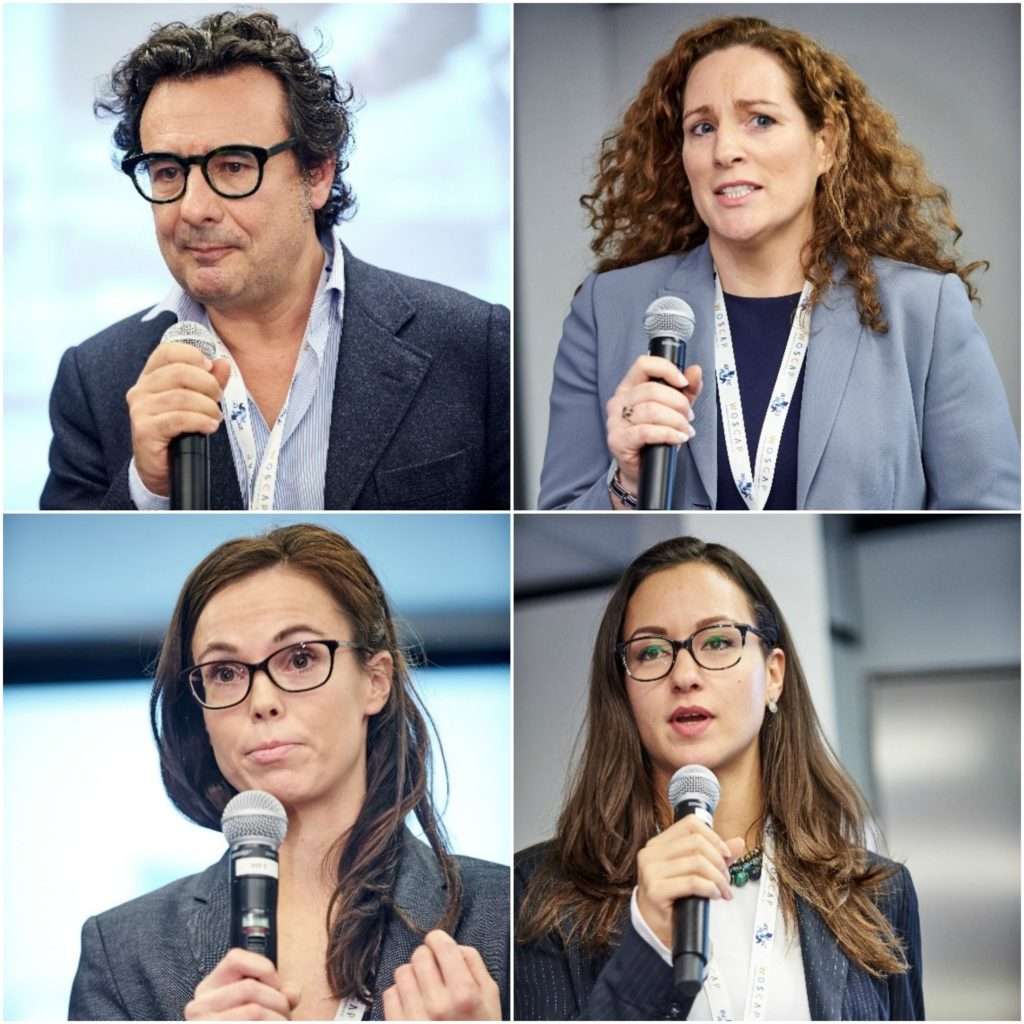 The conference ended with a pitching session What’s next? Capitalizing on our results where five H2020 research projects presented their results and how can they be exploitable and sustainable in the future. Those projects were IECEU – Improving the Effectiveness of Capabilities in EU Conflict Prevention, WOSCAP – Whole of Society Conflict Prevention and Peacebuilding, EU-CIVCAP – Preventing and responding to conflict: developing EU CIVilian CAPabilities for a sustainable peace, GAP – Gaming for Peace and PeaceTraining.eu – Strengthening the Capabilities and Training Curricula for Conflict Prevention and Peace Building Personnel.

At the Wrap-up and closing of the conference Prof. dr. ir. Georg Frerks, Utrecht University mentioned: ‘We need to invest, and have to continue doing that, in critical research, continuous monitoring and evidence based policies. What all this work that we have been presenting today shows us, is that that type of critical attitude needs to accompany policy implementation.’ 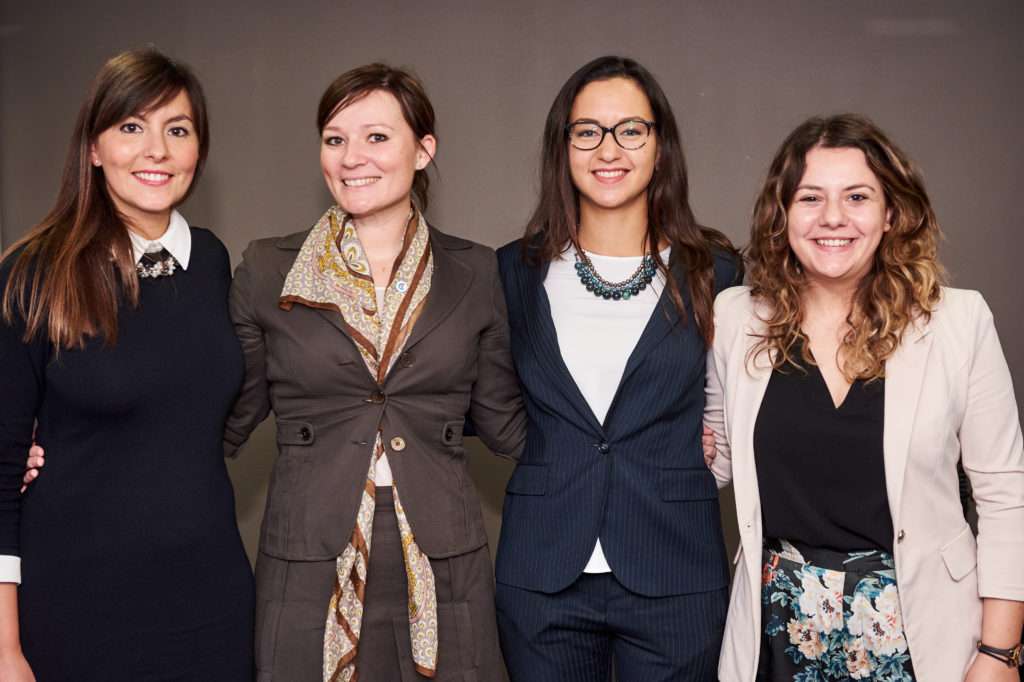 Take a look at the video from the conference:

This project has received funding from the EU Framework Programme for Research and Innovation HORIZON 2020 under grant agreement no 653371.

You can access the deliverables of the project here: