The Centre for European Perspective has hosted its 7th International Study Visit of Ukrainian Local officials in Slovenia. The event begun on Monday, 9th of June at Jable Castle and ended on the 14th of June with a closing ceremony in Vogrsko.

The topic of the visit was “Local Economic Development”. Local economic development is one of the key issues for ensuring the success of the decentralization process in Ukraine. However, the number of enterprises and economic activity at the local level remains very low.

18 local officials from Ukraine have taken part in the study visit, coming from different spheres – from Heads and Deputy Heads of hromadas to Land managers, Capacity development advisors, Experts of the expert group on strategic planning from Ministry of Regional Development, Construction and Communal Services to the Head of regional development centre from Chernivtsi region.

The first day started with a welcome speech from the CEP Executive Director Katja Geršak, followed by the opening delivered by Andrii Borodenkov and Oleksandra Yanushevska from the Embassy of Ukraine in the Republic of Slovenia. Later on, Meliha Muherina, Project Manager at CEP, followed their introductory remarks with an overview of the agenda for the following days.

The second lecture was given by mag. Peter Medved, who focused on the functioning of development councils of cohesion regions, initiating consultations, coordination, cooperation and joint action of ministries, development regions and development partners in the development region (representatives of municipalities, the economy and the non-governmental sector).

The following day was full of good practices in the field of social entrepreneurships in Slovenia, as the participants visited Skuhna and social farm Brinjevka. They also visited Štanjel, where they heard more about Interreg projects between Slovenia and Italy and the process of application for such cross-border projects.

The third day began in Nova Gorica, with a lecture on theoretical approach to historical ties between Slovenia and Ukraine by Mr Sašo Radovanovič. Later, the participants visited the municipality of Nova Gorica, where they met with Deputy Mayor of Nova Gorica, Mr Simon Rosič, who spoke about the history of Nova Gorica and the development of the municipality. He also spoke about cross-border cooperation and EPK project. Later on, the participants visited the Europe square – the joint square of Gorizia (Italy) and Nova Gorica (Slovenia), which honours the entry of Slovenia into EU and the cementery in Zalošče, where they paid their respects to the soldiers of the 22nd Domobranski regiment from Chernivtsi in Ukraine who died during WWI.

On Thursday, the participants visited the Municipality of Renče-Vogrsko, where they met with the Mayor Mr Tarik Žigon, who spoke about the municipality, their projects and plans for future development of the municipality. They also visited main investments that took place in the municipality with the help of EU funds. The participants also paid their respects by laying a wreath at the WWI. cemetery in Bukovica in memory of Ukrainian soldiers, who died in the region during WWI. The study visit ended with a closing ceremony in Vogrsko.

The visit is taking place in the framework of the multi-donor action U-LEAD established by the European Union and its Member States Denmark, Estonia, Germany, Poland and Sweden. It aims at contributing to the establishment of multilevel governance that is transparent, accountable and responsive to the needs of the population of Ukraine. U-LEAD with Europe is supporting the Ukrainian Government, represented by the Ministry of Regional Development, Construction, Housing and Communal Services of Ukraine (MinRegion) as a key political partner in the coordination and implementation of the decentralization and regional policy reforms. The Program carries out demand-driven and targeted trainings for officials at the national, regional and local level. 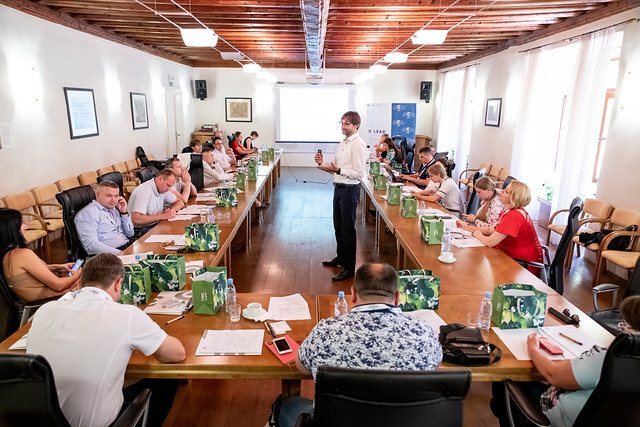