CEP at the Conference on Women, Peace and Security 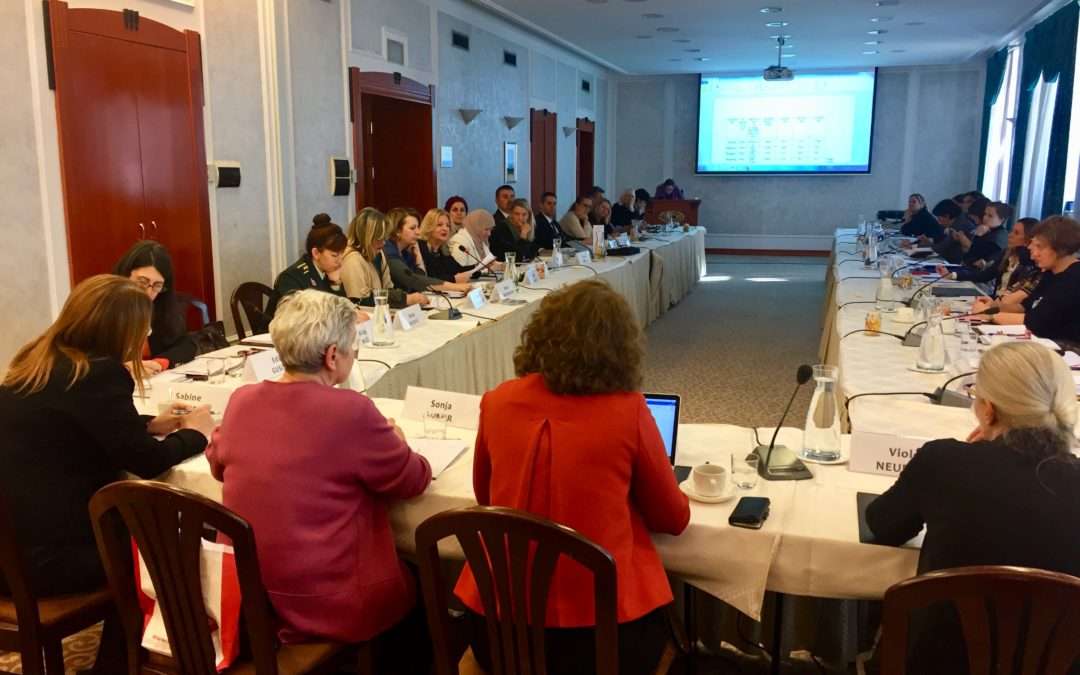 Since the adoption of the historic resolution 1325 in the UN Security Council in 2000 the women, peace and security agenda has gained importance. Many countries consequently developed national action plans or other strategic documents for the implementation of the resolution and its subsequent resolutions. Ministries of Foreign Affairs of Slovenia and Norway on Thursday and Friday organised an event to exchange views and experiences (good practices and lessons learned) between Slovenia and Norway as well as with experts from the Western Balkan region on the development and implementation of national action plans on women, peace and security. Special attention will be paid to the role that national action plans can play in interlinking all elements of the agenda and in synergizing efforts to achieve sustainable peace, security, and prosperity in conflict-affected or fragile countries based on a human rights-based approach.

Centre for European Perspective has been active in the field of peacebuilding, conflict prevention and crisis management in the last decade with a series of research, capacity building and development assistance projects, on a national level but also through various EU projects, building its internal expertise in this topic.

UN Resolutions are extremely important in this area but so is the notion that there is no ‘one size fits all’ solution to this topic when we look at different countries.  A possible lack of resources might also add to the fact that results in some countries might be a bit more modest. The variations of focus related to gender topics was changing quite fast from the Resolution 1325 to Resolution 2242, which is additionally focusing on weapons, terrorism and extremism. Countries must therefore be quick to adapt their strategies in recruitment, training and deployment.

Overall, the topics of peace, security and development assistance seem to be far from the hearts of the Slovenian public. The general public in Slovenia has difficulties understanding why exactly Slovenia should be part of it and relations between the external and internal security nexus. Those topics are also not particularly interesting for the media. A very narrow professional audience in the military, police and foreign affairs seems to understand what might all be about.

To have more peacekeeping representatives and then consequently also women’s representatives should be a strategic choice of a country and demands decision makers’ support.

Slovenia is the ninth country in the World with 4,2% of its military active with troops abroad. Out of almost 1000 military representatives deployed in 2016, almost 10% were women and their share rose from 7% in 2011. Slovenian Police deployed 23 representatives in 2016 and 5 of them were women, which constitutes an almost 22% share. In case Slovenia would want to have more female representatives active in the peacekeeping activities, it should have a clear objective defined first and then a strategy how to achieve it. Applicable research on the topic would help to understand why more women do not apply for peacekeeping missions.

There seems to be great imbalance between the military and civilian secondments in Slovenia. The civilian deployments namely do not only include police deployments but several other civilian positions, from mediators to judges, prosecutors, legal assistance and areas involving access to justice, border security, human rights and gender equality expertise, forensic pathology, victim identification and investigation of war crimes, rapid search and rescue support, correctional services, competence related to the operating environment as well as conflict and culture sensitivity. If properly developed, the export of Slovenian know-how in this field could be increased. Slovenia should therefore seriously consider developing its civilian niche capabilities in the field of conflict prevention, possibly include the gender equality as one of the topics and then create and maintain a pool of experts, who are trained to be deployed to the missions.

The overall framework of civilian crisis management would need a separate strategy and boost, simultaneously  more should be invested in the education and promotion of topics in the field of security (peacekeeping, terrorism, migrations, etc.) in general but also in attracting proper civilian experts and the legislation should be adapted that those are not just public officials. Smaller countries might achieve greater foreign policy impact and visibility with higher civilian representation in the peacekeeping missions. Germany seconds 7 military representatives per one civilian. In Finland that ratio is 5 to one, whereas in Slovenia there are over 30 military deployments per 1 civilian.

It is therefore important that one country knows itself, which areas is it good in and then develops those capabilities in a coherent and planned manner. Slovenia definitely has also women representatives, who are very good subject matter experts in various areas. Strategic orientation in the field of crisis management is crucial. We need to know what do we want and then encourage what we want.

Op-ed was written by Ivana Boštjančič Pulko, Project Manager and Researcher at the Centre for European Perspective since 2008. Her focus are mainly development assistance projects in the Western Balkans in the area of security sector and rule of law reform as well as research activities in the field of conflict prevention and crisis management.

The views expressed in CEP commentary are the views of the author alone.