Euro-Atlantic Integration in the Western Balkans: Not without its Alternatives? 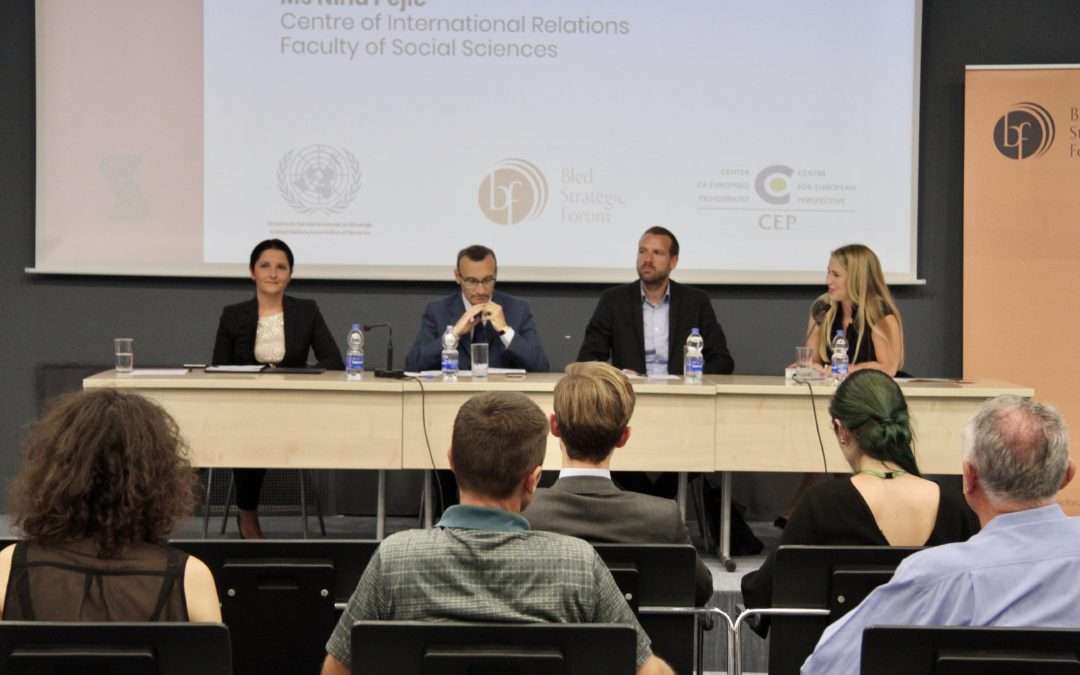 Round table discussion “Euro-Atlantic Integration in the Western Balkans: Not without its Alternatives?” took place on Tuesday, 10 July 2018 at the Faculty of Social Sciences and was organized by the Centre for European Perspective, the Bled Strategic Forum and the MUN Slovenia Club as part of the 2018 edition of the MUNSC Salient youth conference. Three speakers, Ambassador Paolo Trichilo, Ambassador of the Republic of Italy in Slovenia, Mr Peter Grk, National Coordinator for the Western Balkans, BSF Secretary General, Ministry of Foreign Affairs of the Republic of Slovenia and Ms Jelka Klemenc, DCAF Slovenia, have engaged in a vivid discussion led by Ms Nina Pejič of the Faculty of Social Sciences.

Ms Pejič started with a challenging reminder: Federica Mogherini stated publically in 2017 that the Western Balkans will be irreversibly on the path to the EU before the end of her mandate. As one of the initial 6 “old” member states, Italy, so explained Ambassador Trichilo, wholeheartedly supports the entrance of the countries of the WB to the EU, the WB geographically and historically belongs to Europe and the sooner the countries enter, the better. In that way the interests of the member state(s) coincide with the statements of the EU bodies (EASS), in which the Commission has a large voice. Also Mr Grk think the same way: the member states should de-mystify the Balkans and rationally think about what benefits does it bring to let these countries into the EU.

The EU has abandoned the Balkans in the period between 2010-2017 due to its internal struggles (economic crisis, migration crisis, Brexit and identity crisis), but it is now back on track with the hands-on approach towards the integration of the region into the EU, agreed the speakers.

The discussion was closely following the conclusion of the Western Balkans Summit in London, organized in the framework of the Berlin Process. Mr Grk pointed out that the Berlin Process itself is not important, but its outcomes are: the progress in 2018 is indeed outstanding and should be considered monumental for the achievement of the Mogherini’s statement. Also Ms Jelka Klemenc feels that the region has connected through the Berlin Process in a way that is now irreversible in the field of security. The security forces in the region now do not know any other way than to cooperate in the field of internal security issues.

Ms Pejič pointed out that the internal security issues originating from the Balkans region were set as the first priority for the EU in the new strategy for the Western Balkans. In terms of security in the Balkans, all three panelists concurred in the opinion that this is one of the most important fields in which the EU should take the place of the main actor. Although the EU, according to Ms Jelka Klemenc, backed out the Balkans also in this field during the last decade, there was no turning towards the alternative actors in the field of security by the Western Balkans’ countries. To keep it this way, the EU should grab the opportunity and proceed with further security integration after this crucial year of 2018, in which the re-commitment towards the Western Balkans was established and the new strategy for the Western Balkans accepted. For the EU to become a more credible actor in the field of security in this region, the Balkans should become treated as a (possible) security provider instead of a threat.

When they considered the actors that are present in the region, the panelists pointed out the US, which still play a role of the security provider at least in Kosovo and Bosnia and Herzegovina; Turkey, whose President recently paid a visit to some Balkan countries; Saudi Arabia, which is one of the actors that in the field of security might endanger the region through financing religious teachings, that can in turn enhance religious fundamentalism and radicalization. China is also considered an alternative actor through its investments in the region, which should, according to the panelists, be accepted but still controlled in order to comply with the European standards in terms of infrastructure etc. All investments should be made in accordance to the European values, agreed the panelists.

However, all panellists were of opinion that although the alternative actors are present in the region and are competing with the primacy of the EU in the Western Balkans, the Euro-Atlantic integration is not endangered, especially if the EU comes through with the plans of re-commitment and invests in the region both politically and financially-wise.