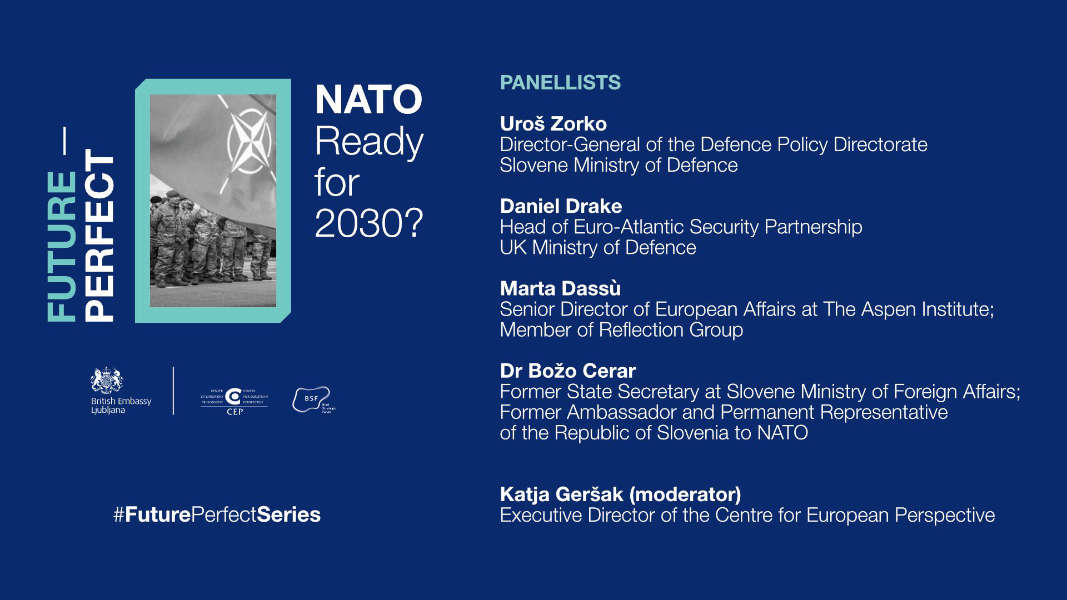 Missed the #FuturePerfectSeries discussion on the future of NATO, organized by the British Embassy Ljubljana, Centre for European Perspective – CEP and Bled Strategic Forum – BSF?

In the third event of the Future Perfect series, the British Embassy Ljubljana and Centre for European Perspective, alongside the Bled Strategic Forum, hosted a discussion with policymakers and security experts to ascertain how ready NATO is for the security threats of the 2020s and what this means for defence policy.

Uroš Zorko (Director-General of the Defence Policy Directorate at Slovene Ministry of Defence), Daniel Drake (Head of Euro-Atlantic Security Partnership at UK Ministry of Defence), Marta Dassù (Senior Director of European Affairs at The Aspen Institute; Member of NATO Reflection Group) and Dr Božo Cerar (Former State Secretary at Slovene Ministry of Foreign Affairs, Former Ambassador and Permanent Representative of the Republic of Slovenia to NATO) joined moderator Katja Geršak (Executive Director, Centre for European Perspective) in discussing the role NATO will play in mitigating the threats the new decade will bring and the current dilemmas NATO and its allies are facing.

In case you didn’t have the time last week to watch the #FuturePerfectSeries discussion on #NATO2030, a recording of the entire event is now available online.