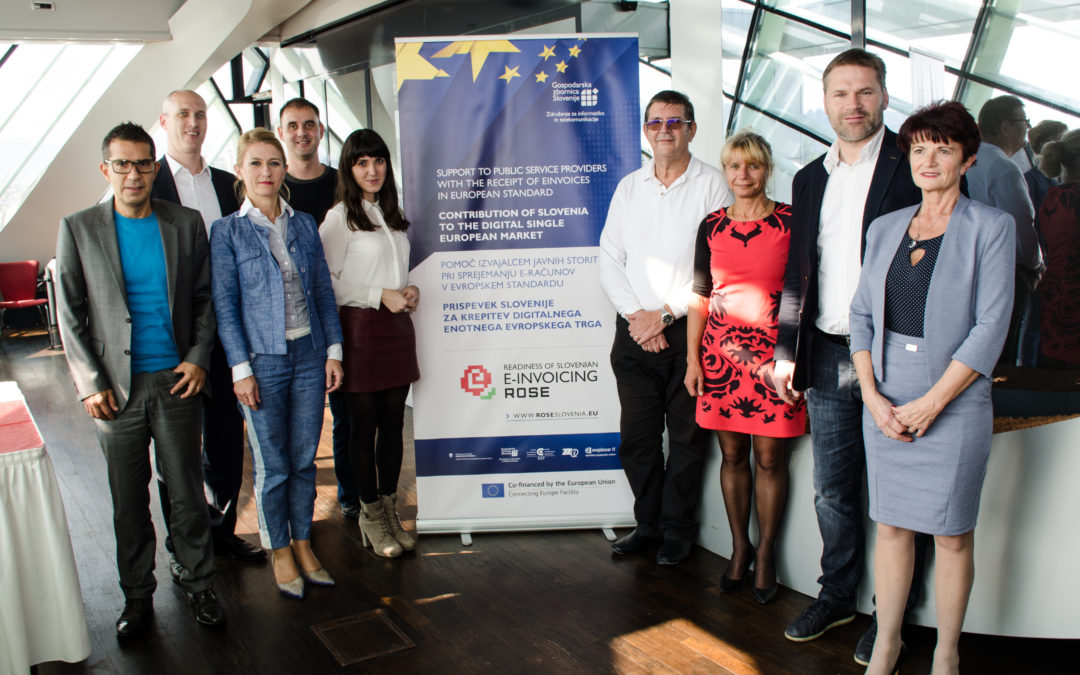 The basis for a new Slovenian eInvoicing standard is being set up in the framework of the “Readiness Of Slovenian E-Invoicing” (ROSE) Action and major steps are being taken towards compatibility with the newly adopted EU standard. In order to improve efficiency in eInvoicing and automatization of the eInvoice recipients recognition, an eInvoices recipients eDatabase is being set up. In the process of preparation, suggestions of providers of the ERP systems and other business solutions are being taken into account. Last week, a kick-off conference took place and attracted over 140 participants, who are involved in the process of eInvoicing in accordance with the European Directive 2014/55/EU.

Kick-off conference “Will we be ready for European standard for e-invoicing?”

The conference devoted to the introduction of the new obligations for the European public service providers in the field of eInvoicing in the European standard was prepared by the ROSE Action stakeholders at the Chamber of Commerce and Industry of Slovenia. Over 140 participants of the conference, to a large extent represented public service providers, whether or not they are budget users, showed great interest for the topic addressed. They followed carefully to the presentation of the upcoming reforms and they greeted the suggested solutions and trainings that will be offered in the framework of ROSE Action.

Update of the Slovenian eInvoice standard

Due to various eInvoicing standards in the European Union, the EU Member States and the European Commission introduced European standard for eInvoices. The variety of standards leads to unneccessary complexitz and higher costs for the subjects. Following the EU standard for eInvoices will be now obligatory for all public service providers. They will be obliged to receive eInvoice if sent in one of the standard forms, confirmed by the European Commission. ROSE Action is rapidly setting up the solutions and specifications for the new Slovenian standard eSlog 2.0 aligned with the EU standard. At the same time, technical solutions are being developed, allowing the public service providers to translate eInvoices, sent in EU standard, to the new Slovenian standard eSlog 2.0.

The new EU legislation contribute to digitalization, standardization and interoperability in the provision of services that serve the citizens, economic subjects and member states. In order to digitalize and simplify the operations of all subjects involved, ROSE Action aims to set up a single eInvoices recipients eDatabase. It will increase operability on the local and national level, simplify cross-boarder communication, and make smooth circulation of the eInvoices in the EU possible.

The topics above were discussed at today’s 4th Steering Board meeting of the ROSE Action, a Connecting European Facility Action, co-financed by the European Union and implemented by the Public Payments Administration of the Republic of Slovenia, Chamber of Commerce and Industry of Slovenia, ZZI d.o.o., Mojdenar IT d.o.o. and Centre for European Perspective.