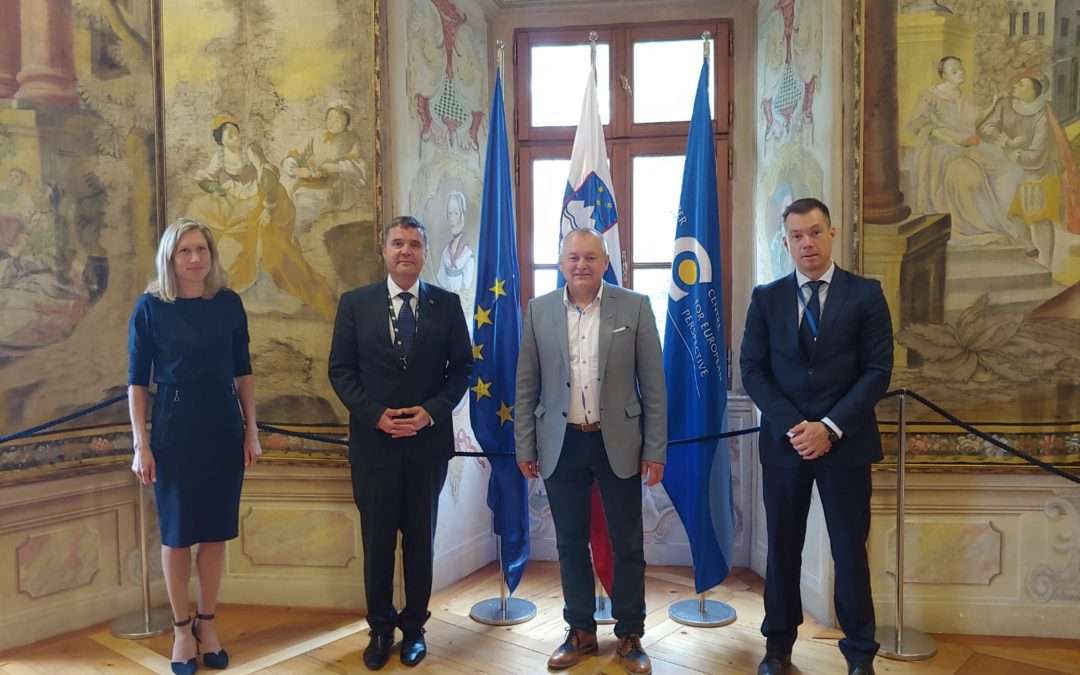 We are proud to announce that the constituent session of the Program Council of the Peace Operations Training Centre (POTC), consisting of State Secretary Mr Tone Kajzer from Slovenian Ministry of Foreign Affairs / Ministrstvo za zunanje zadeve RS, State Secretary Mr Franc Kangler from Ministrstvo za notranje zadeve, State Secretary Mr Uroš Lampret from Ministrstvo za obrambo RS/Slovenian Ministry of Defence and CEP Executive Director Ms Katja Geršak, was held on the 19th May 2020. The constituent session was followed by a solemn signing of the Rules of Procedure of the POTC Program Council and an agreement on the substantive priorities of the first year of operation of the POTC.

Peace Operations Training Centre (POTC) was established by the official decision of the Slovenian Government, issued on the 19th July 2019, following the expert opinion of an inter-ministerial working group set up by the Ministry of Defense and the Ministry of the Interior, in cooperation with CEP and the Ministry of Foreign Affairs, that carried out a comprehensive external expert evaluation and concluded that the establishment of a POTC could help in developing a comprehensive approach to training in peacekeeping operations and missions, and enable Slovenia in passing on its experience and knowledge in the field of such trainings through such a Center.

CEP Executive Director, Ms Geršak, thanked the State Secretaries for their contribution to this event. She stressed the importance of establishing a POTC as there are few such interdepartmental training centers in the world. It was also noted that in 2020, CEP will take over the coordination of a new EU project whose main activities will include conducting trainings in countries where European Union civilian missions operate, which will provide an opportunity to promote POTC and Slovenia in the next three years. All three State Secretaries welcomed the establishment of the POTC and signing of the Rules of Procedure.

State Secretary Kajzer pointed out that the Ministry of Foreign Affairs estimates that the POTC is extremely important for strengthening Slovenia’s credibility within the EU and for strengthening transatlantic relations. It will also enable a comprehensive approach in the field of training, consolidation of knowledge between departments as well as exploiting the synergies of all stakeholders. State Secretary Lampret emphasized the good experience of cooperation between the Ministry of Defense and Slovenian Armed Forces with CEP so far and looks forward to furthering joint work. Slovenia’s contribution to the UN is especially important to the Ministry of Defense, as they have always sought a balance of cooperation in areas that are important for Slovenia.