PRESS RELEASE: SLOVENIA CONTINUES DEVELOPMENT AID TO THE REPUBLIC OF NORTH MACEDONIA IN THE FIELD OF FINANCIAL INVESTIGATIONS 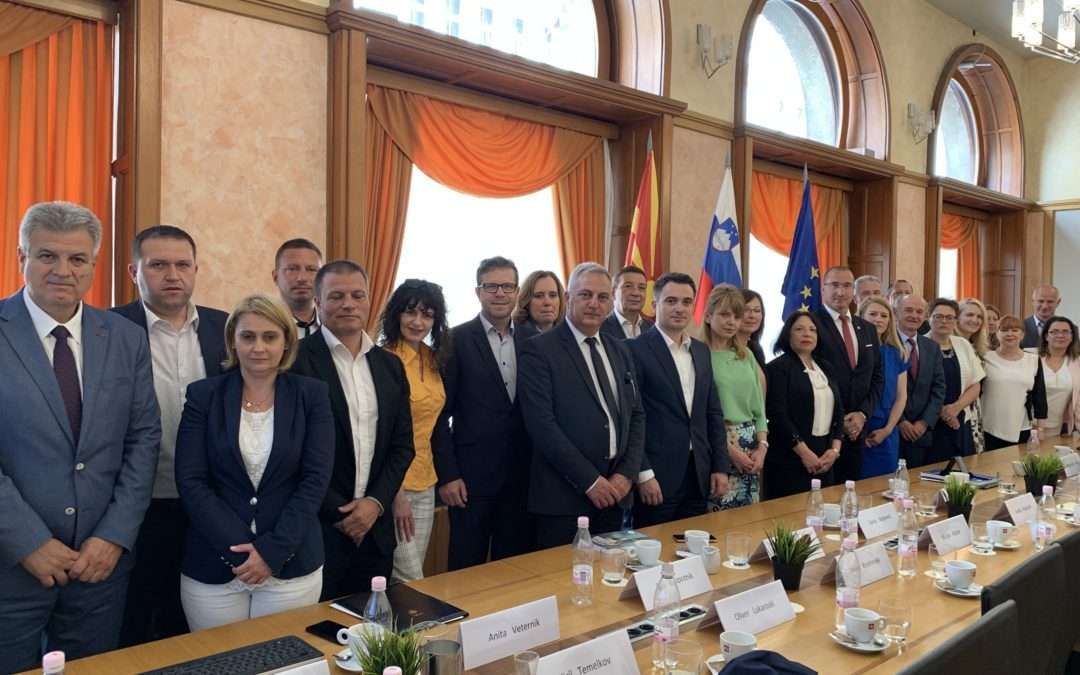 Click here to read more about the project in Slovenian language.

A working visit of the high-level delegation of the Republic of North Macedonia was successfully concluded with the ceremonial signing of joint guidelines for financial investigations on 7 June 2019 in Slovenia, at the Center for European Perspective. The common guidelines are the result of the impressions summarised after the demonstration of the functioning of the Slovenian financial investigation system, which took place from 4 to 7 June 2019.  The composition of the delegation was at the highest level, involving heads of all the institutions of the Republic of North Macedonia, important for financial investigations: General Prosecutor Ljubomir Joveski, Head of the State Prosecutor’s Office for Organized Crime Vilma Ruskovska, Director General of the Customs Administration Gjoko Tanasoski, Director General of the Public Revenue Office Sanja Lukarevska, Director of the Financial Police Arafat Muaremi, Director of Financial Intelligence Office Blažo Trendafilov, with the participation of representatives of the Ministry of the Interior and Central Registry. The working visit is part of the Development Assistance of the Republic of Slovenia in Chapter 24 of the accession to the EU, in the part of financial investigations.

The working visit started on 4 June 2019 with the introduction of the role of the Slovenian regional level and the operation of financial investigations by the District Public Prosecution of Koper, Criminal Police Department at the Police Administration Koper and Financial Office Koper. In Koper, Macedonian delegation was received by the head of District Public Prosecution Koper Barbara Milič Rožman and Head of the Economic Crime Department Alenka Drolc in the addition to the participation of Slovenian national level representatives.

On 6 June, the familiarisation with the functioning of Slovene financial investigation system continued in Ljubljana, where the Macedonian delegation was received by the Slovenian State Prosecutor General Drago Šketa, and presented, together with the head of the Specialized Prosecution for Organised Crime Hari Furlan and representatives of the Slovenian Supreme and Specialized Prosecution, features and some important experiences that can be useful for the Macedonian system of operation. The demonstration of the functioning of the Slovenian financial investigation system continued with the familiarisation of involvement of the Financial Administration of the Republic of Slovenia in financial investigations and the role of the Administration for the Prevention of Money Laundering and the Agency for Public Legal Records and Related Services. Representatives of the Ministry of the Interior – Police presented their approaches to the strategic and operational planning of integrated and financial investigations and demonstrated some of the features of the system that are necessary for the effective operation of investigators. Program Director Andreja Dolničar Jeraj emphasized at the conclusion the importance of an integrated approach in the functioning of the financial investigation system and the good cooperation of all institutions for achieving results.