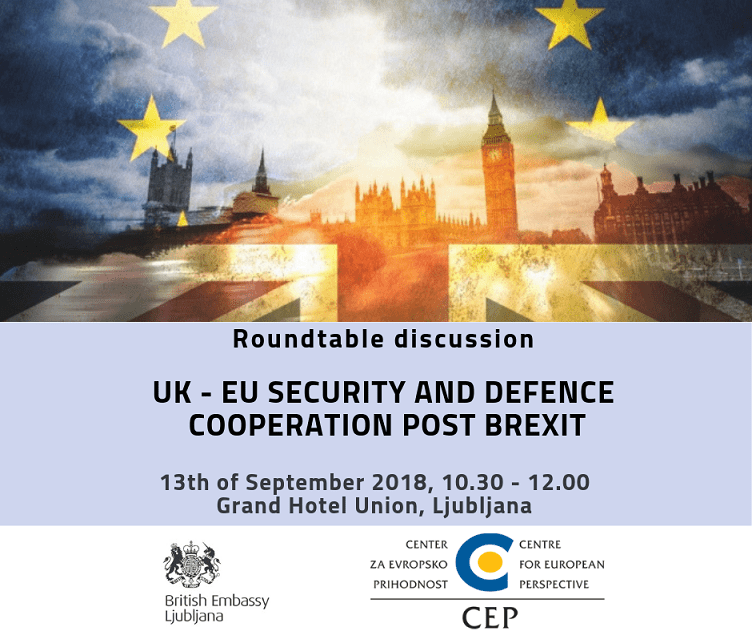 Kindly invited to attend the round table discussion:

From 29 March 2019 the EU will formulate its foreign, security and defence policies without the UK. As the UK prepares to leave the EU, careful consideration needs to be given to the future partnership that the UK has with the EU on security and defence. The UK government has made clear that it wants to build a ‘deep and special security partnership’ with the EU – not least because of our common values and interests. Given growing security threats, more unpredictable and hybrid in nature, which don’t recognise borders, achieving a strong post-Brexit security partnership is a priority for us all.

Brexit will certainly impact the way in which the EU focuses on its own neighbourhood. The UK has made an important contribution to Common Security and Defence Policy (CSDP) missions in a number of key operational areas. It will be important to define how these arrangements will continue. The UK is also proposing continued cooperation on external security to work together to prevent crises, counter hybrid threats, enhance resilience and stabilise post-conflict situations. And cooperation should also include consideration of how we can work together on future capabilities including research and development.  Without continued cooperation Europe will not be as resilient and less able to meet threats that challenge us all.

NATO, as well as bilateral security agreements, provide an important element of continuity outside EU security structures but the EU itself is becoming an important mechanism through which its Member States coordinate, and often pool their approaches to non-military foreign and security policy. As a leading NATO ally and permanent member of the UN Security Council, the UK contributes significantly to this through deploying assets, expertise, intelligence and capabilities. It wishes to continue to do this and remain a committed partner outside of the EU.

Over the past months intensive discussions having been taking place in Brussels to come to a mutual agreement on what the future UK/EU security partnership will look like. This roundtable discussion will address how the UK proposes to maintain a close relationship in the areas of external security and current levels of cooperation.