Western Balkans & the EU: Light at the End of the Tunnel? 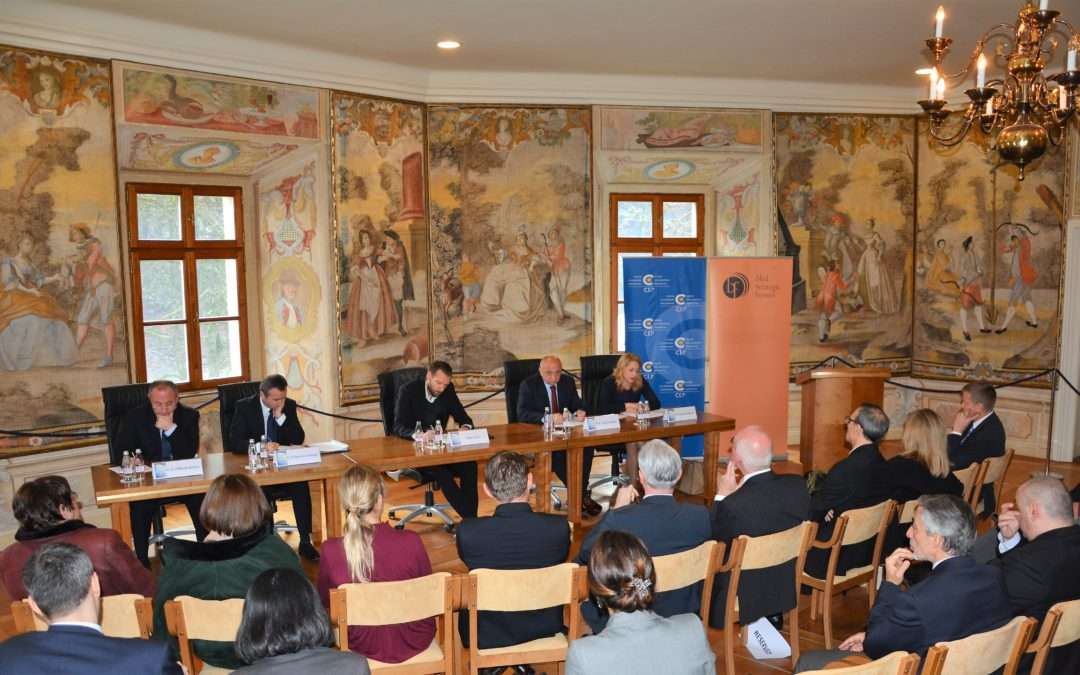 Centre for European Perspective has in cooperation with the Bled Strategic Forum international conference and the Ministry of Foreign Affairs of the Republic of Slovenia held its traditional December round table on the topic of Western Balkans. Round table was attended by more than 50 participants, coming from the Slovenian ministry of Foreign Affairs, Academia, Embassies and long-standing partners of CEP and BSF.

The discussion was based on the conclusions of the Panel on the Western Balkans, held at the Bled Strategic Forum 2017, where a clear message emerged – the process of enlargement of the European Union is still an incentive for transformation for the countries in the Western Balkans, and the speakers agreed in September that the future of the region is within the European Union. The values shared by the region and the EU represent a strong driving force for both sides. However, not attractiveness nor support should not be taken for granted, and the process must have a clearly defined ultimate goal.

Welcome address was delivered by Dr Gorazd Justinek, Executive Director, Centre for European Perspective who shortly presented CEP activities in 2017, stating that there were more than 60, while BSF was seen as the most remarkable one. He also thanked all the partners who have helped us to achieve and conclude a successful year.

Opening remarks were given by Mr Iztok Mirošič, State Secretary, Ministry of Foreign Affairs of the Republic of Slovenia who stressed the importance of inclusion of WB countries into the EU for the prosperity and stability of the region, arguing that Slovenia greatly supports European integrations but stays aware of work that both sides still have to do. He underlined there is a new impetus in regard of the enlargement process and EU still sees vast potential in the region, but reminiscences of the past are sometimes better trigger than anything else, and different accounts of history are stopping the reconciliation process. Past is stopping thinking about the most important – future. Most significant priorities in the WB countries should be the rule of law and economic prosperity. Mr Mirošič said regional initiatives are continuing their work harder than they did in the past and is up to the countries in WB to use this momentum in order to move the things on the ground and achieve its goals. In conclusion State Secretary stated “There is always light at the end of the tunnel, if we all move in the same way”. 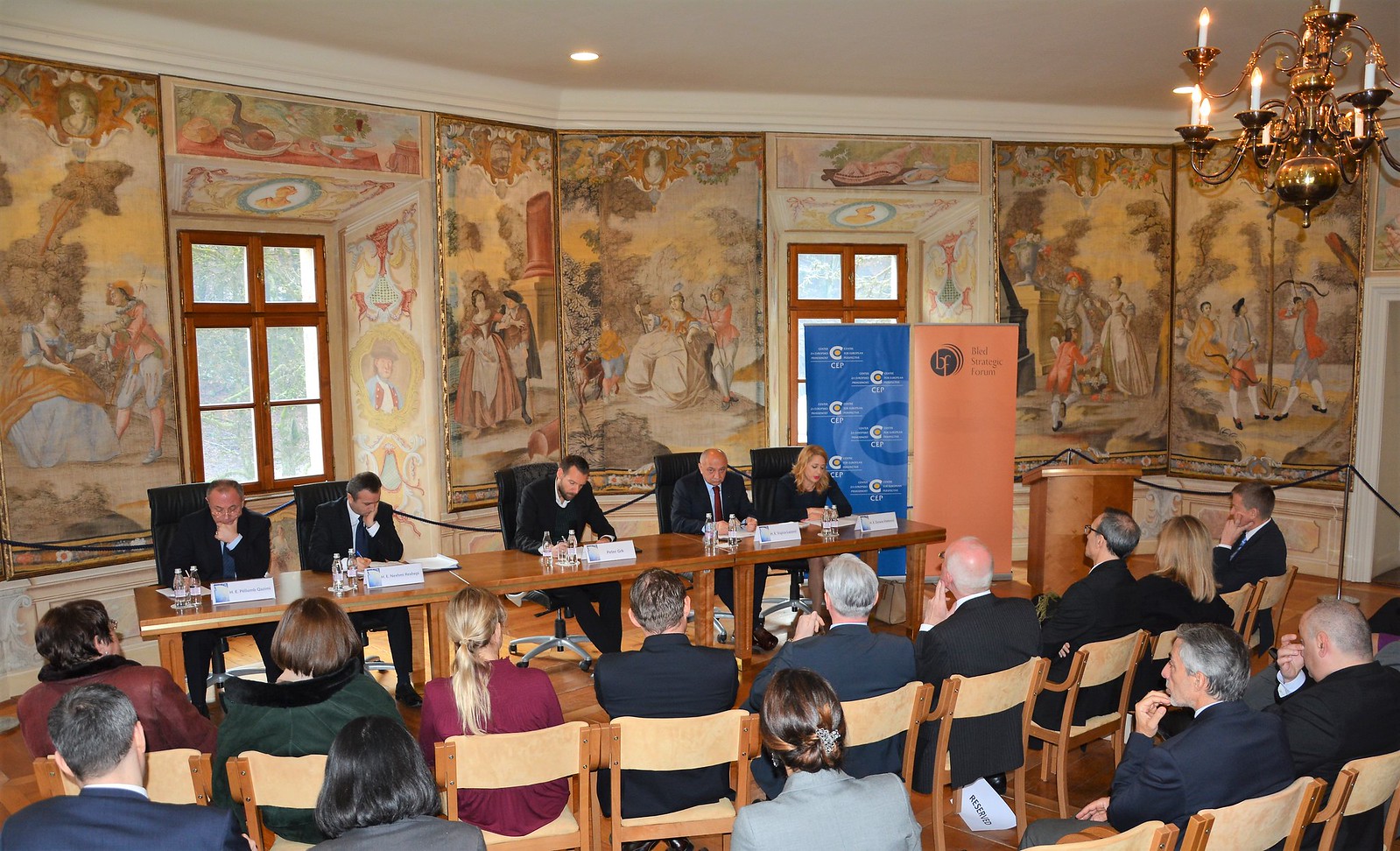 Round table was moderated by Mr Peter Grk, National Coordinator for Western Balkans, Ministry of Foreign Affairs of the Republic of Slovenia, who argued that today we have the window of opportunity in the Western Balkans. Today, compared to 5 years ago, when President of European Commission Juncker said enlargement process is over, we had a speech where Juncker argued Serbia and Montenegro are expected to enter EU before 2025. That marks first time European Commission has set a date, causing change in enlargement atmosphere that until then was facing enlargement fatigue and enlargement patience. Question remains whether the date set is feasible, as well as what actions will be taken in order to close the economic gap between the countries in the region.

Main points of the debate focused on improvement in atmosphere regarding the enlargement, where Balkans are not presented in negative sense anymore; there is a good vibration coming from the EU regarding the regions integration process. Speakers agreed there is a need for a clear enlargement strategy in the region and the need to speed up the process, while they have remained aware that opening the negotiations is just the beginning of a long and challenging path. Panelists underlined the importance of European integration remaining key goal of their foreign policies, while public support for integration remains very high in all the countries, with no alternatives to be considered. Debate touched upon the reconciliation as a pre-requisite for European integration and regional cooperation, nationalistic narratives and wars that were not structurally addressed are hampering the enlargement process. Two main conclusions were drawn, first one being the importance of current positive atmosphere and second one the importance of not losing the momentum, where positive atmosphere should be translated into actions.

Views on the subject were given by H. E. Mr Paolo Trichilo, Ambassador of the Republic of Italy, H. E. Mr Bart Twaalfhoven, Ambassador of the Kingdom of the Netherlands, H. E. Mr Pawel Czerwiński, Ambassador of the Republic of Poland, H. E. Ms Edit Szilágyiné Bátorfi, Ambassador of Hungary, Nicola Stewart, UK Embassy and Zoran Stančič, Head of the European Commission Representation in Slovenia who stressed the importance of such events that are facilitating the integration process. They have argued very little progress was seen from the WB states in regards the integrations, while the current positive momentum should be used to advance their agenda in more aggressive way. Speakers agreed that from a policy perspective we are in a stage where interdependence between WB and EU is very high, due to different cross-state issues, such as refugee crisis and illegal trade, that cannot be resolved without the inclusion of the whole European region. They have agreed the debate on whether WB should enter or not is useless, since positions are clear, the prosperity of the EU clearly depends on the success of integration process, but on the other hand accessing countries are themselves responsible for acquiring proper acquis, meeting all the criteria and setting the pace of change. Importance of regional initiatives was underlined, where cooperation between the countries can help them in speeding up the process, while renewed political efforts are expected from WB countries.