Western Balkan: Future of Europe is our Common Agenda 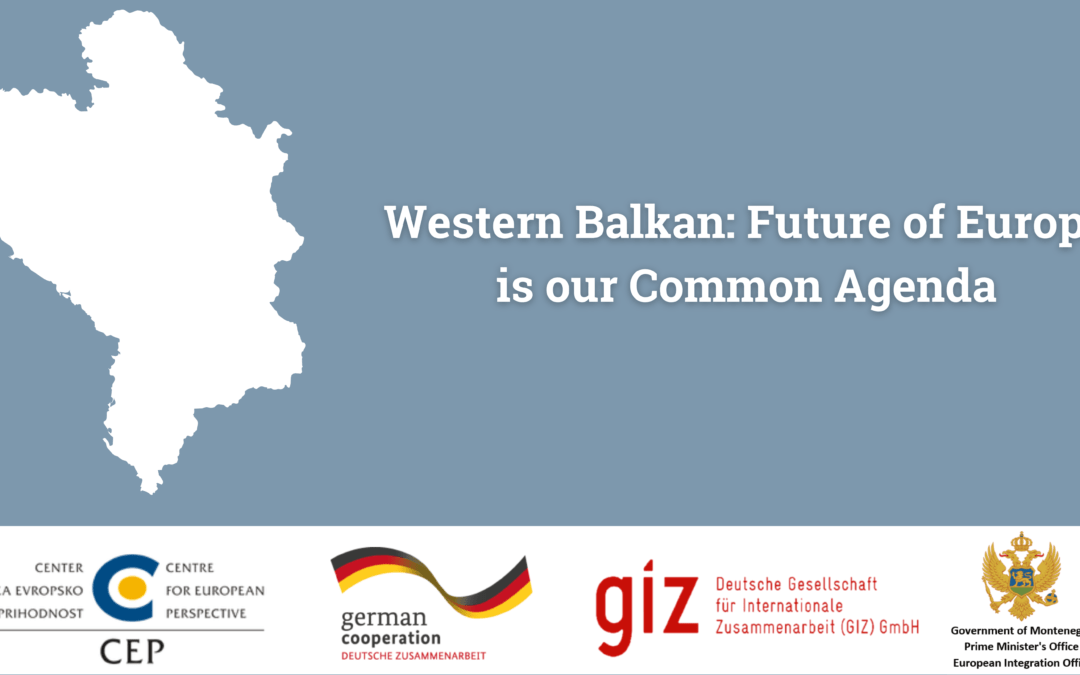 Ljubljana, XX November – The first in a series of workshop as a substantive contribution of Western Balkans 6 (WB6) countries to the EU-wide debate on the Future of Europe will take place on 1 December 2021 in a hybrid model from Podgorica. It will be organised by the Centre for European Perspective in co-operation with the European Integration Office of Montenegro and structures in charge of co-ordinating European affairs from WB6. Assistance will be provided by the regional project for the Promotion of EU Integration, funded by the Deutsche Gesellschaft für Internationale Zusammenarbeit (GIZ).

The event will begin with an introductory address by Mr Zdravko Krivokapić, Prime Minister of Montenegro and Mr Gašper Dovžan, State Secretary, Ministry of Foreign Affairs of Slovenia.

The first panel of the workshop will provide a platform for discussion between relevant stakeholders in the European integration process at the level of Deputy Prime Ministers, Ministers for European Integration and Chief Negotiators from the Western Balkans countries. The discussion will focus on next steps in the European integration process of WB6, a possible common approach to specific common topics and sectoral policies, as well as the existing challenges.

The second panel of the workshop is entitled “Climate Change and Environment Goals” and will explore the possibilities for the Western Balkans to contribute to the EU priority goals on climate change and environmental degradation. The discussion will focus on the European Green Deal and what role the Western Balkans can play in transforming the EU into a resource-efficient and competitive green economies.

The third and final panel on “Investing in Youth Today” will focus on what investment into the youth can contribute to a more prosperous Europe. Facilitating platforms, which provide equal opportunities for youth in education and the labour market, as well as to empower young people to take an active part in building their societies, is crucial for the economic development of WB6. Moreover, fostering opportunities for youth in the Western Balkans is a key challenge in WB countries’ European integration efforts.

This event has been initiated by the European Integration Office of Montenegro and structures in charge of co-ordinating European affairs from WB6 and it will be organised by the Deutsche Gesellschaft für Internationale Zusammenarbeit (GIZ) GmbH Regional project on promotion of EU integration on behalf of the German Government, the Centre for European Perspective in co-operation with and under the auspices of the Slovenian presidency of the Council of the EU, with the support of the EU-funded EU4ME project.