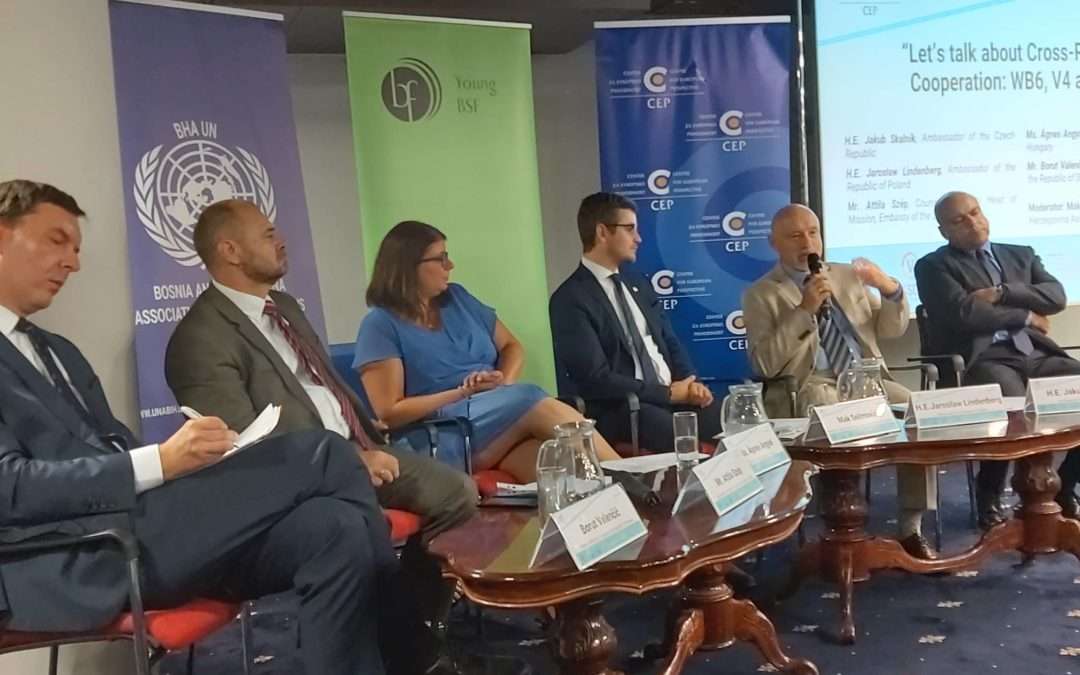 Centre for European Perspective has together with Bosnia and Herzegovina Association for United Nations and supported by International Visegrad Fund, organized a 2-day event that opened the floor to youth and civil society of the Western Balkans, V4 and EU, giving them a chance to discuss their concerns, challenges, ideas and prospects with policy makers and experts.

Event was held on 5th and 6th August in Hotel Europe, Sarajevo and was attended by around 50 participants coming from different spheres of the society.

Opening words to the event were delivered by Mr Amer Kapetanović, Head of Political Department at Regional Cooperation Council. Mr Kapetanović stressed the importance of youth and regional cooperation, while also gave some insight into the latest Balkan Barometer, that shows a gloomy situation in the Balkans.

and was moderated by Jasmina Banjalučkić, Secretary General, Youth Council of Federation of Bosnia and Herzegovina. Panel explored the experience of EU, V4 and WB in better involvement of youth, as well as their role in Euro-Atlantic integrations of WB.

and was moderated by Mak Selimović, President, Bosnia and Herzegovina Association for United Nations, discussed why is cross-regional cooperation important in the SEE region and whether or not the-already-existing cross-regional cooperation between V4 and WB6 can be further developed in resolving complex matters of common interest. Round-table also served as an occasion to asses cross-regional opportunities, threats and obstacles in cooperation. Event was concluded by a reception where all the participants and speakers continued the discussion in an informal atmosphere.

Second day was dedicated to Visegrad Café where each table covered one topic and each table had project representatives who moderated and facilitated the discussion. Public contributed to the discussion on each of the topics and supported it with a pre-prepared set of data, research conclusions and materials. Participants have switched the tables after 30 minutes to converse with a new mix of participants. Once all rounds of conversation were complete, project partner representatives presented the main conclusions of each discussion. Topics discussed were Democratization, Human Rights, Sustainable Development and Reconciliation.