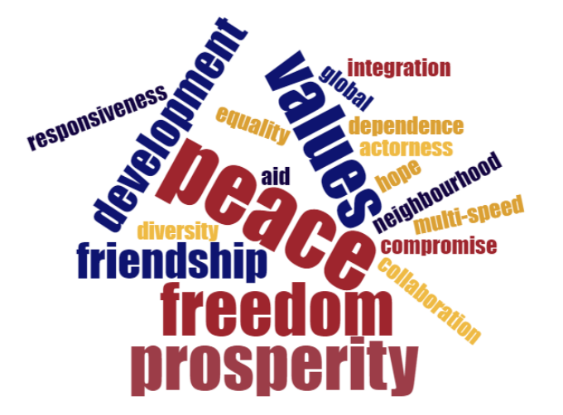 Europe Day, held on 9 May every year, celebrates peace and unity in Europe. Marking the anniversary of the historical speech delivered by the then foreign minister of France, Robert Schuman, in Paris in 1950, the continent remembers the origins of the idea that he set out on that day – the idea of a new form of cooperation in Europe, unthinkable earlier on the divided and war-torn continent. His vision was to create an institution that would manage and pool the coal and steel production, which is believed to be the beginning of what is today the European Union. Today CEP Team collected a couple of ideas about the future of the EU.

Schuman’s idea has seen the light of day only a year later, but the spirit of integration remained strong and led to further cooperation and collaboration of the nations that have not long ago been involved into a cruel war against each other. Looking back at the 20th Century, it appears to be rather unthinkable to gather the nations under one roof, where they share common values, beliefs and aspirations for the future. Yet, our predecessors made it. They united the community of European nations into a highly integrated economic, political and social community.

»We must not take all this for granted, we must try hard to build on the foundations, which the founding fathers of the EU developed.« – Gorazd

»Future of the EU: I still dare to hope that de facto solidarity will follow.« – Tina

Years of progress, years of compromises and years of efforts passed. Yet, the EU is facing an overwhelming amount of challenges. From populism to racial intolerance, from migration to financial and economic challenges, from sky-rocketing youth unemployment rates to the armed conflicts in its neighbourhood. However, we cannot miss the progress that the continent has seen in the last couple of decades. Peace among the nations and prosperity across the peoples do outweight the sproadic disagreements.

»Only united Europe can play a role in the world of tomorrow.« – Ivana

Keeping that in mind shall push us forward. It shall trigger even stronger belief in the unity, trust in the solidarity, and faith in the power of cooperation. As only such mindset can keep the EU with its specific nature of actorness on the global stage as a global actor.

»Only a cooperative, integrated and prosperous EU can be the global actor of the future.« – Sabina

»We should never forget the reasons behind the idea of united Europe. Referring to Donald Tusk: Together we stand, divided we fall.« – Ingrid

And what are the key ideas of CEP about the future of the EU?