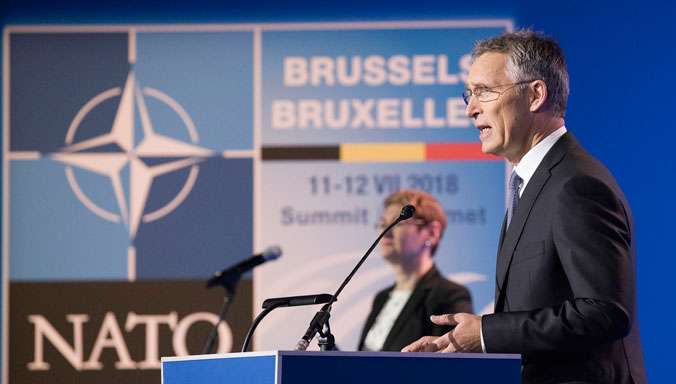 The 26th NATO Summit took place on July 11th and 12th in Brussels. Those meetings gather NATO members, Heads of State and Heads of Governement to evaluate and update the Alliance’s strategy. In general, the Summit was to summarise the work that has been done so far in terms of defence and security aspects as well as to create common fields of future cooperation between EU and USA.

NATO Summits have always been crucial for the work of Center for European Perspective. Peace and security, which are the core of NATO discussions, are strongly emphasized in our work. CEP understands peace and security as one of the main conditions for development, democracy and rule of law. Therefore, NATO decisions have an impact on our three main targets: democratization, youth and security. Accordingly, CEP will be coorganizing a follow up of the Summit in September 2018 together with the Euro-Atlantic Council of Slovenia.

This year’s Summit was an opportunity to recall that NATO remains the foundation for strong collective defence and security in a changing geopolitical environment. The main focus of this two-days Summit was to strenghten the Alliance’s deterrence and defence posture in a whole-of-government approach, while it is facing challenges and threats from all strategic directions.

To new state and non-state actors, military forces, terrorist, cyber, and hybrid attacks, Heads of State declared the implementation of new tools. In order to maintain its technological edge, the Alliance engaged to optimise intelligence and set up a partnership with industry and academia. A new biometric data policy and a Cyberspace Operation Center have also emerged from this Summit.

The discussions of the Heads of state focused on regions of strategic importance; that is, the Middle East, the Korean Peninsula and the Western Balkans. But also, this Summit was an opportunity for the members of the Alliance to condemn the recent actions of Russia: illegal and illegitimate annexation of Crimea, destabilization of the eastern Ukraine, the attack using a military-grade nerve agent in Salisbury. Even though NATO claims to remain open to dialogue, the Alliance postulates that Russia is challenging Euro-Atlantic Security.

In this context, Brussels Summit was an opportunity to strenghten the relations between EU and NATO. President Donald Tusk, President Jean-Claude Juncker and NATO Secretary General Jens Stoltenberg signed a new EU-NATO joint declaration on 10 July, two years after the first EU-NATO Joint Declaration signed in Poland. The Joint Declaration sums up the progress that has been done since the previous summits and recalls the fundamental character of their cooperation. The EU and NATO also declared to enhance their cooperation on different fields such as: military mobility, cyber security, hybrid threats, counter terrorism as well as women and security. Donald Tusk, president of the European Council addressed Donald Trump directly that Europe needs United States in order to create a common defence and security. He also emphasized that Europe do not have and will not have a better ally than USA.