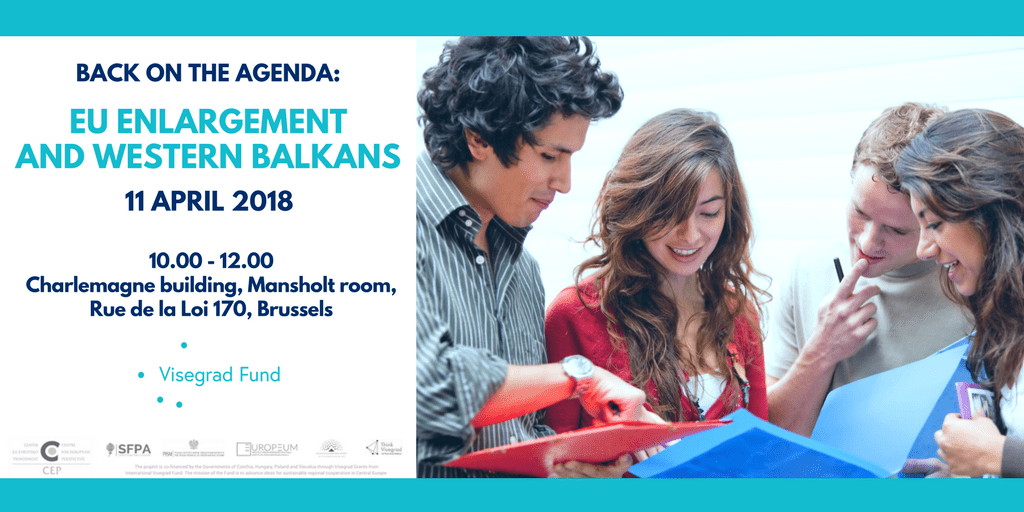 With the support of the International Visegrad Fund, Centre for European Perspective is organizing a public debate on the challenges of youth in the Western Balkans, EU enlargement and the future of the South-East Europe in cooperation with Institute for Foreign Affairs and Trade (IFAT) (Hungary), EUROPEUM Institute for European Policy (Czechia), Slovak Foreign Affairs Association (SFPA) and Polish Institute of International Affairs (PISM).

On Wednesday, 11 April 2018, between 10.00 am and 12.00 pm a public debate will follow at Charlemagne building, Mansholt room, Rue de la Loi 170, Brussels. Our panellists will discuss the future of the EU enlargement process and the Western Balkans with the representatives of the civil society and young generation.

Centre for European Perspective is opening the floor to the civil society of the Western Balkans, giving them a chance to discuss their concerns, challenges, ideas and prospects with EU representatives, policy makers and experts. You are cordially invited to take part in a public discussion on the future of the Western Balkans’ biggest asset, its youth, in the heart of the EU, in Brussels.

BACKGROUND OF THE EVENT

The Western Balkan has returned to the agenda of the European Union. However, getting closer to the EU also brings greater responsibility. The European Commission’s motto ‘exporting stability, rather than importing instability’ must remain a strong pull factor, since it carries the idea of strengthening WB democracies and finally implementing economic and social reforms, which would have tangible results for citizens. The EU-WB enlargement strategy, numerous top-level visits by EU representatives, including a wide range of different regional initiatives, are charting the EU’s path ahead. Nevertheless, it is the empowered civil society of the Western Balkans that are best at voicing their ideas and perspectives. And which part of society is more relevant for outlining the prospects for an (EU) future than the young generation?

One question inevitably arises: What do the youth of the Western Balkans have to say? An education system that is incompatible with the labour market, high youth unemployment, a massive brain-drain, anomalies of the state-building process and the slow post-conflict reconciliation process are only some of the everyday concerns plaguing young people in the region. Comprehensive structural reforms, the openness and inclusiveness of public institutions, more scholarships, better education and job opportunities, visa-free regime for the entire region and a chance not only to speak but also to be heard seem to be positive solutions to these challenges. The youngsters of the Western Balkans might see EU membership as the light at the end of the tunnel, but they are also fully aware that their respective governments need to do their part of the job first.

*This designation is without prejudice to positions on status and is in line with UNSC 1244 and the ICJ Opinion on the Kosovo Declaration of Independence.