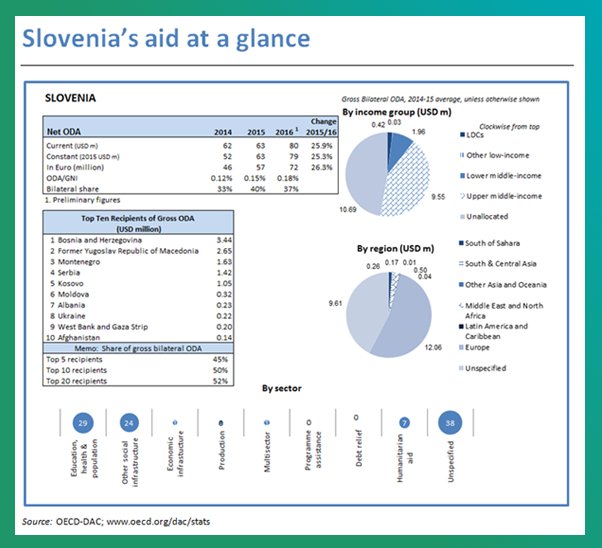 Slovenia has built up a sound development programme over the last 12 years, particularly in the Western Balkans, and should now work on tightening its focus in other regions in order to get the most impact from its aid contributions, according to a new OECD report. The first DAC Peer Review of Slovenia welcomes a steady rise in Slovenia’s foreign aid budget in the last few years, although it notes that an increase in funds spent on hosting foreign refugees arriving in Slovenia has been a factor pushing up official development assistance (ODA) levels. In-donor refugee costs made up 11.2% of Slovenia’s ODA in 2015.

Slovenia sends two thirds of its bilateral aid to countries in the Western Balkans, where it is able to share its transition experience as an early joiner among former Yugoslav Republics of the European Union and NATO, and is helping to develop poor areas. The Review recommends that Slovenia narrows its geographic and thematic focus in other regions to avoid spreading its aid too thinly outside the Balkans.

“It is encouraging to see Slovenia increasing its development aid and showing such willingness to share its transition experience with countries in the Western Balkans striving for a similar path,” said DAC Chair Charlotte Petri Gornitzka. “Outside the Balkans, Slovenia can enhance its impact by focusing more on a smaller number of high-value projects, delivered through partnerships in carefully selected countries and sectors.”

An OECD member since 2010, Slovenia joined the Organisation’s Development Assistance Committee (DAC) in 2013, having begun its development co-operation programme in 2005. The biggest share of Slovenia’s bilateral aid is spent on areas the DAC sees as key, such as strengthening good governance, the rule of law and social infrastructure and services.

Slovenia’s aid is made up 100% of grants, with no loans included, and the country complies with the DAC’s ODA reporting rules. Slovenia has not yet reported other official flows or private flows to developing countries to the DAC, however, and is encouraged to do so.

The top five recipients of Slovenian aid in 2015 were Bosnia and Herzegovina, the former Yugoslav Republic of Macedonia, Montenegro, Serbia and Kosovo. Slovenia sent only 15.1% of its ODA to least-developed countries in 2015, below a DAC average of 28.4%.

Each DAC member is reviewed every five years in order to monitor its performance, hold it accountable for past commitments and recommend improvements. Reviews use input from officials in the Review country and partner countries – Montenegro and Cabo Verde for this Review – as well as civil society and the private sector. Read more on DAC Peer Reviews.